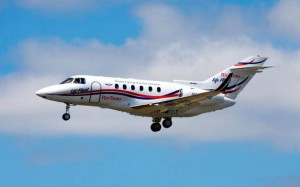 The jet, which is registered VH-RIO, is fitted with a Lifeport PLUS specialist aeromedical interior and will be used to transport urgent care patients from around WA and the Indian Ocean Territories, cutting transport times significantly over the RFDS’s Pilatus PC-12s and Beechcraft King Airs. The jet will be able to carry three stretcher patients and three clinical staff at once.

“Western Australia is the perfect location for the country’s first aeromedical jet service, given the daily challenges of flying patients across some of the longest aeromedical transfer distances in the world,” said RFDS Western Operations chairman Tony Crook.

The Hawker will be based at Perth Airport and flown by crews from Maroomba Airlines, while the RFDS will provide medical staff. A dedicated patient reception facility will be built at Maroomba’s terminal at Perth Airport for RFDS use.