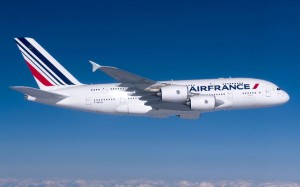 Air France became the first European airline to take delivery of an Airbus A380 when the French carrier’s first example was handed over in a ceremony at Hamburg on October 30.

The Engine Alliance GP7200 powered aircraft, configured to seat 538 passengers in a nine first class, 80 business class and 449 economy class arrangement, is the first of 12 Air France has on order. It will enter service on November 23 on the Paris-New York route. Three of Air France’s 12 A380s will be delivered through to the northern spring of 2010, the airline said, closely followed by a fourth. Paris-Johannesburg flights will launch during the northern winter of 2009-2010.

“Each A380 will enable Air France to save 12 to 15 million euros a year, which, in today’s depressed economic climate, provides the company with the means to withstand the crisis,” said Air France KLM CEO Pierre-Henri Gourgeon.

Air France’s first A380 is the 20th A380 delivered so far by Airbus – 10 are now in service with Singapore Airlines, five with Emirates and four with Qantas operating on 13 routes. To date, says Airbus, these aircraft have accumulated over 75,000 revenue flight hours in over 7900 commercial flights, carrying over 2.5 million passengers.