Qantas’ longest repatriation flight to go via the South Pole

Qantas is gearing up to perform one its longest-ever flights connecting South America and Australia – via the South Pole.

According to a report by Executive Traveller, the Flying Kangaroo will endeavour on a nearly 18-hour trip on 5 October, when it performs a repatriation flight from Buenos Aires in Argentina to Darwin.

At nearly 14,700 kilometres, it will be one of the longest flights ever performed by Qantas’ 787 Dreamliner, and notably, will be transiting over Antarctica on its way home.

It’s quite rare for airlines to perform flights over Antarctica, as it was largely banned up until 2011 due to the continent being so far from any emergency landing point.

However, it is not unheard of for carriers to fly over the South Pole, with some of Qantas’ pre-COVID routes to South America taking this shortcut. And Qantas is no stranger to non-stop long-haul flights, particularly on its Dreamliners.

With a total distance of 14,498 kilometres, the flight time clocks in at 17 hours and 20 minutes.

Qantas has said previously that its non-stop flights between Australia and London are likely to “be in even higher demand” after the COVID pandemic, as passengers attempt to avoid congested airports and long layovers.

However the airline has suggested it could move its hub for non-stop Australia to London flights from Perth to Darwin, due to the uncertainty posed by Western Australia’s “conservative border policies”.

The move is being considered despite Qantas CEO Alan Joyce previously suggesting the airline’s Perth-London 787 Dreamliner service was the “best route on our network”.

Meanwhile, Qantas also continues preparations for the introduction of Project Sunrise, which would see non-stop flights from destinations such as New York and London to Australia’s east coast.

Qantas was due to finalise a deal to purchase the 12 A350-1000s necessary to make the trip last year, but pushed it back due to COVID grounding all international flights.

In February, Joyce argued that Qantas is the only airline in the world with the ability to make ultra-long-haul, Project Sunrise-style flights profitable.

“It is a unique opportunity for Qantas because Australia’s so far away from everywhere,” said Joyce. “And we could justify a fleet size of a significant amount of aircraft that makes it economic.

Joyce said in a separate earlier interview that while the business would “obviously” not put in an order until international markets recover, he was still “very optimistic” about Project Sunrise. 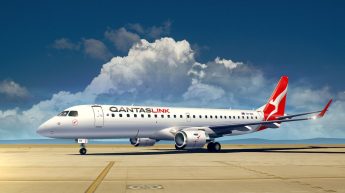