Mitsubishi Aircraft Corporation has signed a letter of intent (LOI) with US-based leasing company Aerolease Aviation for the purchase of 10 MRJ90 regional jets, as well as options for a further 10 aircraft.

The announcement of the LOI, which both parties hope to finalise into a firm contract over the next month, took place at the Singapore Airshow on Tuesday.

Currently, the MRJ program has 223 firm orders and 184 options or purchase rights from ANA, which is the launch customer, Japan Airlines, Eastern Air Lines Group, US-based Skywest, Trans States Holdings and Air Mandalay. The program is about three years behind schedule.

Aerolease partner Jep Thornton said all the major business terms had been agreed to, with some legal work left to be completed before the LOI can be converted to a firm order.

Thornton said Aerolease had yet to secure any airline customers for the aircraft, although discussions have begun with a number of airlines.

“Clearly there is an interest for what the MRJ does,” Thornton told reporters during a media conference at the Airshow.

“We believe there are markets all over the world that we are able to access.”

Aerolease is the first leasing company to commit to the MRJ. The MRJ program recently resumed flight testing. First delivery to launch customer ANA has been pushed back to the middle of 2018.

Mitsubishi Aircraft Corp president Hiromichi Morimoto said latest schedule for the MRJ program incorporated all the risks and challenges that the company could foresee at this time.

Further, Morimoto said the addition of a leasing company to the MRJ order book was of “significant importance” to the program.

“We have been recognising how important the role aircraft lessors play in the aviation industry and we are proud to be adding a lessor partner in our order book in the very early stage of the program,” Morimoto said.

“This order not only brings a positive impact on the lessor community but also contributes to the MRJ program expanding its airline customer base.”

The aircraft, with its distinctive pointed nose, is powered by Pratt & Whitney PW1200 geared turbofan engines and available in either the the 90-seat MRJ90 or 70-seat MRJ70 models.

The MRJ competes with Bombardier’s CSeries and Embraer’s E-jet family in the less-than-100-seats market.

And the Brazil-based Embraer said on Tuesday it expected 6,350 new aircraft deliveries in the 70-to-130-seat category in the Asia Pacific region over the next 20 years.

Some 25 per cent – or 1,570 new aircraft – would be for the Asia Pacific region, including China.

“We are showing airlines the benefit of movie from ‘red oceans’ to ‘blue oceans’, that is, to move away from a crowded marketplace and seek out opportunities in markets that are currently underserved, or not served at all, where yield are also stronger, moving from one to two digits,” he said in a statement.

Embraer noted there were more than 250 markets in the Asia Pacific – or 30 per cent of city-pairs served only by narrowbody aircraft – had less than a daily frequency.

And there was a large potential replacement market, with about 250 jets with between 50 and 150 seats currently older than 10 years.

Embraer has brought the full sized cabin mockup of its E2 regional jet to the Singapore Airshow. The rollout of the first E2 was expected to take place before the end of February. 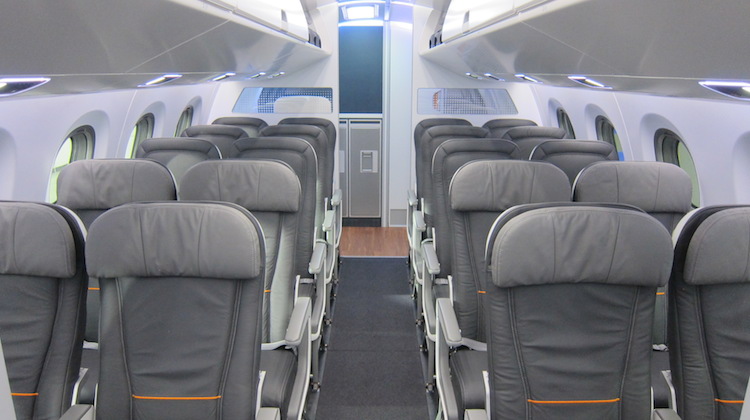 The file image of the economy class cabin in the E2 cabin mockup. (Jordan Chong)

Meanwhile, in other news from the Airshow, Singapore-based leasing company Aviation PLC has placed a top-up order for five new ATR 72-600 turboprops.

The lessor, which has placed ATRs with the likes of Virgin Australia and Fiji Airways in Oceania, has a total of 35 of the type on firm order.

ATR and Aviation PLC said in a joint statement it had taken delivery of more than 20 ATRs since it first ordered the aircraft in 2011.

“It provides the lowest fuel burn and the most reduced operating costs among all regional aircraft of its category,” Chatfield said.