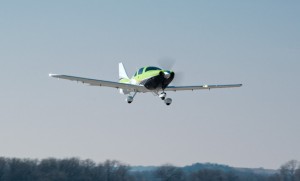 The Cessna TTx has made its first production flight. (Cessna)

Cessna says its TTx single-engine composite aircraft has made a successful first production flight in the US state of Kansas.

The company said the aircraft reached an altitude of 17,000 feet and a speed of 213 knots during the flight.

Described as the world’s fastest fixed gear, single engine piston aircraft, the TTx has an operating ceiling of 25,000 feet and comes with an optional ‘Flight Into Known Icing’ system, giving pilots more flexibility in planning routes. Cessna says the aircraft can cross the United States with only one stop.

The Ttx has flown 275 test flights during development, logging 338 hours in the air.