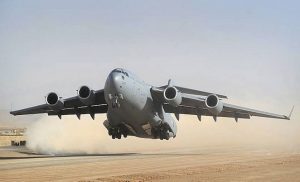 Some 226 C-17s are in service, 206 with the US Air Force and a further 20 with international customers, including the four delivered to the RAAF.