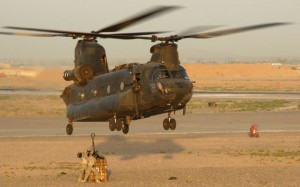 An Australian Army CH-47D prepares to take an underslung load of ordnance at Kandahar. (Dept of Defence)

Boeing Defence Australia (BDA) says it has responded to the Australian Army’s tender for deeper maintenance of its six CH-47D Chinook helicopters.