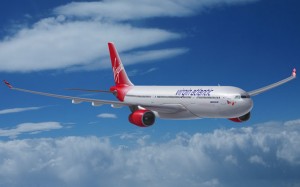 Virgin Atlantic has signed a contract with Airbus for six A330-300s  and a lease deal for a further four A330-300s with lessor AerCap, confirming an announcement made last June.

The aircraft will be configured with 270-seats in three classes, and primarily employed on routes from the UK to North America, the Caribbean, Africa and Asia, and provide intermim capacity until Virgin Atlantic’s 787 deliveries begin.

The order was finalised on December 30.