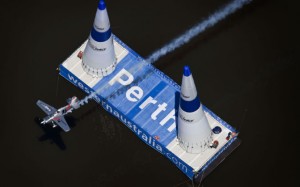 The Red Bull Air Race will return to Perth on the weekend of April 17-18 2010, featuring Australian pilot Matt Hall.

As in previous years, the race will be run over the Swan River, with a race airport set up at Langley Park, adjacent to the Air Race course. Organisers say that the ticketed area on Sir James Mitchell Park in South Perth will also be expanded.

“I am over the moon that Perth has returned to the schedule for the 2010 Red Bull Air Race World Championship,” said Hall, a former RAAF fighter pilot.

“When I was told at the last race of the 2008 season in Perth that I would be making my Red Bull Air Race debut in 2009, I was excited to say the least but to now be able to make my Australian debut, back in Perth where for me the dream began, is just so special.”

Hall had a stellar debut in this year’s Air Race series, becoming the first rookie to finish the championship on the podium in third place. Britain’s Paul Bonhomme took out this year’s championship, with Austrian Hannes Arch the runner up.