The Boeing 747 is surely, as Owen Zupp says, in its twilight years. There is no starker illustration of this than the backlog for this visionary aircraft, which stood at just 20 at the end of August 2019.

After its Paris debut in 1969, the Boeing 747 entered commercial service on Pan Am’s London-New York early the following year. Compared with the 707 that it superseded, the 747 was so massive, so intimidating, that marketing strategies focused on softening its image as a mechanical behemoth. A British Airways advertisement referred to it as a “big fat friendly jumbo”. 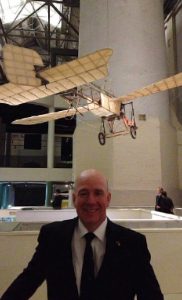 A file image of Owen Zupp.

Travellers quickly warmed to the aircraft. More than any other, the 747 rendered the term “jet-set” a quaint anachronism by bringing international travel, once the preserve of the well-heeled, within reach of those of us of more modest means.

Half a century and 1,552 delivered aircraft since a wide-eyed public first saw the 747 airborne at the Paris Air Show, the jumbo is nearing the end of the line. So Owen Zupp’s book, Boeing 747 – Queen of the Skies is a timely opportunity look back on a time when air travel was redefined, and the aircraft that did more than any other to redefine it.

Zupp fulfils the promise of the book’s subtitle, Reflections from the Flight Deck, by giving the unique perspective of a pilot who has flown 747s for Qantas, as well as the view of an experienced aviation writer and long-time contributor to Australian Aviation.

20,000 hours. In updating my log books, I knew that I’d passed the mark but I didn’t realise how long ago! Spread over nearly 40 years and around 100 different types of aircraft, I’ve been privileged to fly for pleasure and for a living. ? pic.twitter.com/lW5uiSx3ON

It’s divided into 10 chapters, each offering a different angle on the aircraft, with keenly observed personal impressions interleaved with meticulously researched technical details.

And it is a testament to the aircraft’s versatility. Chapter 1 takes the reader through the first flight by a Qantas aircraft over Antarctica, another covers a flight of the latest – and likely final – variant, the 747-8F from Hong Kong to Sydney, while another explains the 747’s ability to stun onlookers by flying with a fifth engine fixed to the wing. There are other, less technical but no less insightful chapters – one on the chance observation of a rocket heading into space from the west cost of the US, another on Zupp’s thoughts, as he pilots a 747 at night over Western Europe, of the young men who had fought and died in the same skies many years earlier.

Another chapter muses on clouds, and their hidden dangers, while another goes through the preparation and execution of a charity fund-raising flight from Sydney to Melbourne’s Avalon Airport.

The book ends with an account of the Qantas Boeing 747-400 VH-OJA City of Canberra, and its journey – including a tricky landing – to its final resting place at Albion Park south of Sydney and into the tender care of the Historical Aircraft Restoration Society (HARS).

Since 2015 City of Canberra has been offering visitors to HARS to get up close to a 747 for the first time, or to reminisce about journeys made decades ago to adventure in distant lands.

As Owen Zupp says: “At rest, but not retired.” Boeing 747 – Queen of the Skies. Reflections from the Flight Deck by Owen Zupp.

Boeing 747 – Queen of the Skies. Reflections from the Flight Deck is available as an e-book on Amazon’s Kindle Store.