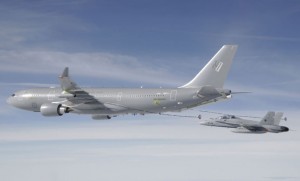 A file image of the RAAF's first KC-30. (Airbus Military)

Airbus Military has failed to deliver a KC-30A MRTT to the RAAF by the end of 2010, despite the company saying as late as last month that it still planned to meet that schedule.

The latest schedule slip, now taking total KC-30 program delays to over two years beyond the original late 2008 first delivery schedule, is not believed to be of a technical nature, but is due to ongoing delays in writing the comprehensive technical documentation for the aircraft’s all-new boom and its remote operating station, which currently does not satisfy the RAAF’s stringent airworthiness standards. The RAAF’s airworthiness requirements are recognised worldwide for their high standards, and without having the appropriate technical documentation upon which to establish an acceptable baseline, the RAAF is unable to verify the airworthiness of the boom and therefore clear it for operational use. These ongoing delays have contributed to the project being placed on the Defence Minister’s Projects of Concern list earlier this year, a position new Minister Stephen Smith reiterated in November.

“The delivery of a first and new aircraft with a lot of new systems to a new customer/roperator is always very complex and time consuming,” an Airbus spokesman said in response to queries from Australian Aviation. “It involves not only a purely technical acceptance, but also a huge amount of paperwork regarding contractual documentation, as well as ensuring all the support activities and related documents are taken through the acceptance process. The qualification process, which includes crew training, is also very lengthy. The amount of work to be performed during the acceptance process prior to the final hand-over is therefore huge. So, rather than rush the process prior to the Australian Christmas break and summer holiday period, it has been agreed to take the time needed to complete the procedures in a proper manner. This will lead to a final hand over and formal acceptance moving into the New Year.”

It is believed the RAAF was prepared to accept delivery of the first two KC-30As in an interim configuration without the boom being certified, as it has a more immediate requirement for the aircraft’s airlift and pod hose and drogue refuelling capabilities. But sources claim Airbus has remained focussed on delivering the full capability, perhaps due to parent company EADS’s push for the lucrative 179 aircraft USAF KC-X contract which is due to be decided in early 2011, for which it would obviously like to be able to demonstrate a fully operational boom. In the interim, the ADF has been forced to continue chartering air refuelling services from the USAF and Omega Air to assist with Super Hornet delivery flights, F/A-18A/B deployments to Malaysia, and major exercises such as November’s High Sierra.

There are hopes a final resolution to the delivery schedule can be determined by February and deliveries can commence soon after, and that an Airbus crewed KC-30 will be on display at March’s Australian International Airshow at Avalon.

Nonetheless, despite the new delays, Airbus Military has declared 2010 an “outstanding year” for its A330 MRTT program, and says it plans to deliver aircraft to three customers, including Australia, in 2011. It says it has conducted a number of successful test flights in recent weeks with an MRTT, culminating in a major exercise with the Portuguese air force in which 25 PAF F-16 pilots underwent air refuelling training and more than 70 wet and dry contacts were made with F-16s in various configurations.

Conversion of the second aircraft for Saudi Arabia has also commenced at Airbus’s Madrid facility, and delivery of the first aircraft is due in 2011. Further, the first A330 based Future Strategic Tanker Aircraft (FSTA) for the RAF successfully conducted a number of dry contacts with Spanish EF-18 fighters using its centreline hose and drogue Fuselage Refuelling Unit in early December, and is also moving towards first delivery to the RAF in 2011.

Jetstar to interline with Cathay and Dragonair